The Sri Lanka Army has deployed three additional Task Forces to the Wanni theater of battle. Newly raised TF 5, 6 and 7 are currently placed in defensive mode in areas recently captured from the LTTE. TF5 is deployed in Tunukkai/Mallavi, TF6 in Pooneryn and TF7 in strategic Elephant Pass – the doorway to Jaffna peninsula. The army has four more task forces deployed in the Mullaithivu region; TF2, TF3, TF4 and TF8. These are placed in offensive/semi-offensive mode and are actively used in the battle to free remaining area and civilians held by the LTTE. In addition to the deployment of Task Forces, two new brigades were added to the army’s 59 division (59-4 and 59-5).

With the recent changes, the army now has 8 task forces and 7 divisions (61 and 56 divisions based in Mannar and Vavuniya) leading the war against LTTE. Task Forces have lesser number of troops than a full division and are formed with a particular goal (task) in mind. These are later converted to divisions as more brigades/troops are added. For example the Task Force 1 which was raised back in 2007 is now known as the 58 division. In addition to task forces and divisions, decimating LTTE’s frontlines are troops from 1,2,3,4 Special Forces regiments who have done an invaluable service throughout the 4th Eelam War.

Given below are screenshots from three recent articles published on pro LTTE Tamilnet website. According to Tamilnet, these letters were issued by Regional Directors of Health Services (RDHS) for Ki'linochchi and Mullaiththeevu districts. However, simple translation errors present on the letterheads say otherwise. 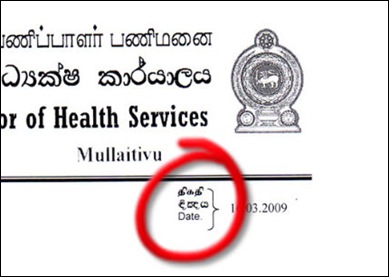 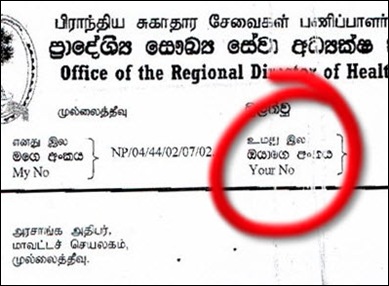 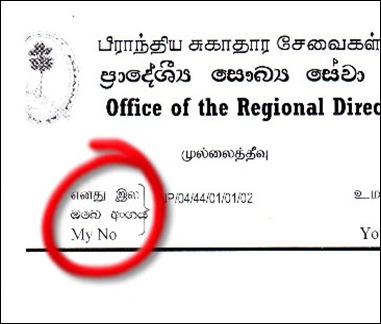 An explosion was reported in a Muslim religious ceremony in Godapitiya in Matara area. The explosion occurred when a Liberation Tigers suicide bomber detonated inside a mosque attended by a large number of civilians.

Several people have been injured in the blast. According to our sources, government minister Mahinda Wijesekara who was attending the event is also among the injured.

There is no truth to the rumors that are floating around which suggest the LTTE has pushed the Sri Lanka Army (SLA) back to Vishwamadu junction. Some pro LTTE media and gossip sites also reported that the LTTE had managed to overrun the Puthukuirippu junction. These reports are largely exaggerated.

Several small LTTE attack teams however have managed to infiltrate into SLA held territory and have launched several hit and run attacks. It is these isolated attacks that the pro LTTE media exaggerate with attractive phrases like overrun’ ‘breached’, ‘pushed back’, etc. The truth is that the LTTE has not been able to breach any of SLA’s forward defence lines and they are still boxed into an area of around 40sq.km.

Units from SLA’s 55, 57 and 58 divisions are positioned/advancing as below: