A minor explosion was reported a short while ago in Rathmalana area today (29th). It appears that an electric transformer was the target of the explosion. The transformer itself was undamaged in the incident. There were no casualties and no arrests have been made so far.

Meanwhile in the northern front, Sri Lanka Air Force (SLAF) flew 5 bombing sorties on LTTE targets in Paranthan and Kilinochchi. The air sorties were made as ground troops inching closer to Paranthan continued to face heavy resistance from LTTE cadres. Two of the sorties were flown in the morning, two in the afternoon and then another one in the evening. Exact LTTE casualties in these aerial raids are not available as of now. Despite LTTE resistance, SLA units have now advanced up to 2.5km from Paranthan junction.

Meanwhile the LTTE has handed over 17 bodies of SLA soldiers fallen in Mullaithiv battles today. Around 30 soldiers from the army’s 59 division were killed in fierce fighting at location 5-6km south of Mullaithiv town on the 27th.

In other news around 250 Police Special Task Force (STF) personnel passed out after completing training today. The passing out parade was held at Katukurunda STF training base.

Soldiers of the Task Force 04 were able to capture Nedunkerni in Mullaithiv district today (21st).  Nedunkerni is of strategic importance as it’s one of the main townships located along road which connects Vavuniya and Mullaithiv. Troops have been laying siege to this town for 2 days and were able to take complete control of it by today morning. 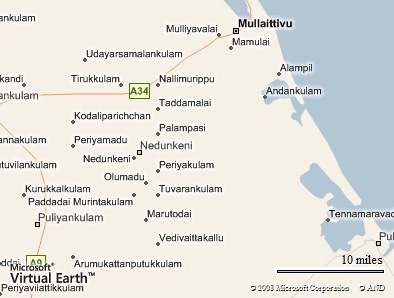 Meanwhile the LTTE launched a large scale counterattack in northern front yesterday (20th). The counterattack originated from north of Iranamadu and it was evident that the LTTE had used it’s best cadres equipped with body armor and helmets. SLA units fought valiantly but had to abandon half a kilometer stretch of land (which was recently captured). Around 30 soldiers were killed in this incident. Confirmed LTTE casualty details are not available as of this moment. As mentioned previously, SLA have been expecting LTTE counterattacks from direction of Iranamadu. Despite these attacks, SLA operations are continuing in this area.

Meanwhile LTTE radio transmissions have revealed that two of their senior female sea tiger cadres had gone missing on the 19th, after the SLAF conducted an airstrike near the Nayaru lagoon. Both were regional leaders of the LTTE and were identified as Siran and Suhandini. The LTTE also lost a vessel used for arms transport last week.

Heavy fighting has been raging in Paranthan and Kilinochchi regions in north where both the SLA and the LTTE has suffered heavy casualties. The army lost around 100 soldiers in Kilinochchi and Paranthan fighting  yesterday - 80 soldiers were killed and another 24 have gone missing. Total SLA casualty figures for the past two days stand at around 145 soldiers killed and further 300 being wounded. This includes casualties incurred from the Kilali offensive.

Bulk of the SLA casualties on Kilali operation were caused by artillery fire which rained on advancing troops. On Paranthan and Kilinochchi fronts however, close quarters fighting has been going. Despite heavy counterattacks by elite cadres, LTTE’s Paranthan line remains breached in several different locations. Tigers have also lost a good number of experienced cadres in these operations. Military Intelligence estimates LTTE casualty figures to be over 175 (this figure does not include casualties caused by 15+ air sorties carried out by SLAF).

Although the resistance is fierce and the casualty figures are higher, SLA has no intention of stopping the offensives. Some pro LTTE media have already declared the SLA operations have been ‘repulsed’. On the contrary, more large battles of similar scale are to be expected with LTTE fighting for its very own survival.

Fierce fighting erupted between the Sri Lanka Army (SLA) and Liberation Tigers of Tamil Eelam (LTTE) near Kilali/Muhamalai forward defence lines today (16th). Fighting erupted when troops from SLA’s 53 division moved ahead of their positions in a fresh attempt to storm LTTE’s second FDL in the national front. Around 30 SLA soldiers have been killed in the fighting and 10 more have gone missing. As of this moment, troops have fallen back to their original positions. First LTTE FDL in this area was captured by SLA on the 20th of November.

Meanwhile heavy fighting also raged in several locations in and around Kilinochchi. On some fronts, forces have moved in further past the LTTE built earth bund and there has been close quarters fighting going on inside buildings and other structures. SLA’s 57 and 58 divisions have been conducting the majority of these operations. The Sri Lanka Air Force (SLAF), flew more than 16 air sorties targeting LTTE positions in Kilinochchi and Paranthan (earth bund included) in the past two days alone (13th and 14th).

Another LTTE held village in the Mullaithiv district, Ampakamam, was captured by the Sri Lanka Army (SLA) on today (15th) morning. Ampakamam was an strategically important village for the LTTE and it was used for a number of military purposes including cadre movement and logistics transport. Small attack teams from VIR (Vijayabahu Infantry Regiment), SR (Sinha Regiment), SLLI and GR (Gajaba Regiment) attached to the Task Force 03  have been targeting LTTE fortifications in Ampakamam for a few days until the tigers were left with no choice but to flee.

Meanwhile, several pro LTTE media have been celebrating ‘victories’ achieved by the LTTE on the Kilinochchi front. One such article claimed that LTTE fighters killed over 120 SLA soldiers and injured another 250 or so troops. Actual SLA casualties are less than half of these figures and the SLA were not pushed back in any of those fronts. As reported earlier, Terumurikandy junction is under SLA control even as of this moment. Some humorous articles even suggested that SLA operations were being halted due to shortage of troops. These are not true. The army is actually planning to deploy another new division – The Task Force 05 – to the Wanni theater of battle in the coming days.

57 division units operating south of Iranamadu today overran the strategic Terumurikandy junction. Fierce fighting has been raging in this area since yesterday (10th) where the tigers resisted the army advance for hours. 57 division units suffered casualties while trying to overrun the LTTE built earth bund yesterday with over 20 soldiers being killed and around 60 more being injured. LTTE were able to capture 12 bodies of SLA soldiers fallen in yesterday’s battle.

However, 57 division units who fought relentlessly despite casualties, overran the Terumurikandy  junction today (11th) afternoon. Experienced LTTE fighters manning this bunker line withdrew toward Iranamadu, unable to resist the two pronged attacked launched by the SI formations. LTTE casualty details are not available as of this moment. Clearing ops are still continuing in the area.

Infantry formations of the 59 division have entered Alampil area where a major sea tiger base is located. Alampil is located around 10km south east of Mullathivu town. As of now this area is practically surrounded with SLA units moving in from north and north west of the town. To the south and south west of Alampil lies the Nayaru lagoon and to the east is the sea. LTTE base located in this area plays a major role in LTTE operations in Mullaithivu district not only because this is a known sea tiger launching pad but it also is a major logistics hub of the tigers. Anyway supply line from Alampil to Mullaithiv has now been cut off by the 59-1 brigade. 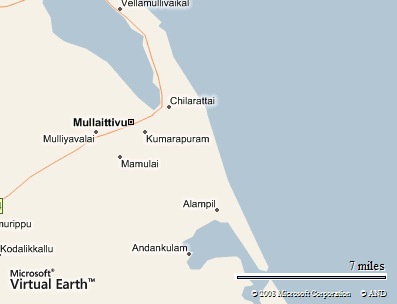 Meanwhile infantry units of the 57 division demolished an LTTE boat in the Iranamadu lake last evening (3rd). The boat with an unknown number of LTTE cadres on board, was close to the tank’s southern bank when it met its doom.

Kokavil, a major LTTE stronghold along the A-9 highway, has been captured by the Sri Lanka Army (SLA)’s 57 division. Fighting has been going on in this area for quite some time with both 57 division (north of Kokavil) and Task Force 3 (south of Kokavil) been engaged in frequent firefights with LTTE cadres. 57 division units who moved southward from their positions south of Kilinochchi yesterday, were able to take control of Kokavil area by today morning. Kokavil town and the area where a former Rupavahini transmission tower is located, is now under SLA control.

Meanwhile Nedunkerni, a major LTTE stronghold in Mullaithiv district is facing increased pressure. Army’s 59 division who recently captured Otiyamalai, are around 4km from Nedunkerni. Task Force 3 is also advancing east of Mankulam and a possible link up between the two divisions could prove to be disastrous for LTTE cadres in the area.

In other news the SLA is planning to add yet another new division to the Wanni theater of battle; Task Force 4 (TF$). Task Force 4 will be raised as a semi offensive division. The area where this division will initially be deployed is unclear as of now.