Sri Lanka Army's 58 division and the Commando regiment brought the town of Illuppaikadavai under their control today (20th) after a prolonged firefight with LTTE cadres in the region. Illuppaikadavai housed a large LTTE base which was used for multiple purposes by the tigers including land and sea operations. Regular infantry units from the 58 division as well as small groups of army commandos had surrounded the area by yesterday and moved ahead of their positions early morning today. LTTE retreated further north after suffering casualties at the hands of advancing forces. Illuppaikadavai is located around 10km north of Viduthalaithiv, where the tigers lost control of a major sea tiger base recently. 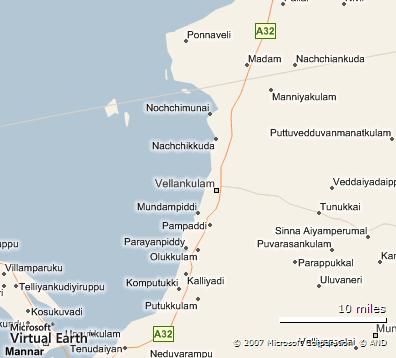 As we reported earlier, the Air Force has been continuously targeting LTTE cadres who retreated from Viduthalaithiv. A sea tiger boat movement was attacked by SLN patrol craft and by SLAF bombers today evening just 3km south of Nachchikuda. 3 boats were confirmed to be destroyed while another 3 more are believed to be damaged. Nachchikuda, where LTTE maintains another sea tiger base, is located a further 15kms north of Illuppaikadavai. It is believed that a large number of LTTE cadres who fled Viduthalaithiv are currently stationed in this base. It can be assumed that the 58 division will soon lay siege this base, considering the fact that they have already advanced two more kilometers north after the capture of Illuppaikadavai.